The greater the National Debt as a proportion of GDP, the lower the solvency and the appreciation of the ability to repay the debt

By Gaietà García, a lecturer on the Master in Commercial and Sales Management at EAE Business School

In this article, I will present certain relations between the concepts in the title, some of which are, at the very least, strange or surprising.

GDP and GDP per capita

The term Gross Domestic Product (GDP), refers to the value at market prices of the output of goods and services internally in a country within a certain year or period of time. 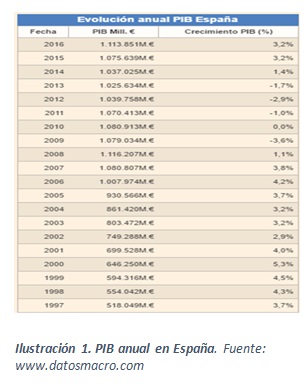 Figure 1 shows a GDP for Spain, in 2016 of €1,113,851 M, (1.114 trillion euros). This is used to measure a country's nominal creation of wealth for each financial year. A sustained increase in GDP is associated with the creation of employment, without taking other factors into consideration.

It can be observed that, in the decade between 1997 to 2007, GDP doubled, before the growth rate slowed down in the years that followed.

It is an absolute magnitude and, as such, we must be careful when interpreting it, as it necessary to take extremely significant qualitative considerations into account, such as the uneven contribution to GDP of the different Autonomous Communities, and the distribution of GDP across sectors of the economy, among others.

As each country or region has a different number of inhabitants, in order to standardize the population effect, the nominal GDP is divided by the average population over the period in question, to determine the GDP per capita. In other words, this is the wealth creation generated by each inhabitant on average, as shown in Figure 2. Obviously, the term 'on average' is matter of mathematic certainty which, at the same time, does not reveal extremely important qualitative nuances. For instance, it is highly likely that the contribution of wealth of the nation or region as a whole is uneven: a lot of people generate a little and a few people generate a lot. With certain macroeconomic adjustments, the GDP per capita can be used to calculate the National Income per capita, which is subject to the same nuances. 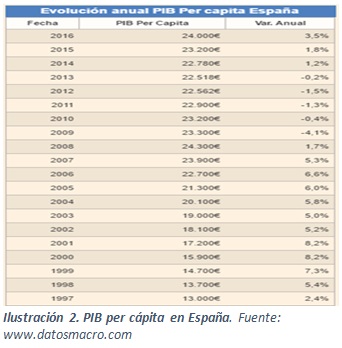 Just like individuals, households and companies, the State also gets into debt. It turns to what are known as financial markets, in which certain lenders give loans that have to be paid back in line with the stipulated timescale and cost. The nominal amount owed by a State at any given time is known as the National Debt.

A State's National Debt at a certain time is divided by the number of inhabitants in the same period to calculate the National Debt per capita, or, in other words, the amount that each person on average owes to the financial markets.

The evolution of Spain's National Debt in recent years, in absolute values and per capita, is shown in Figure 3. In order to get a relative perspective of the wealth generated each year, GDP, with respect to the public borrowing for the same period, the amount of the National Debt is also shown as a percentage of GDP. This measures the capacity to repay the loans taken out by the State. 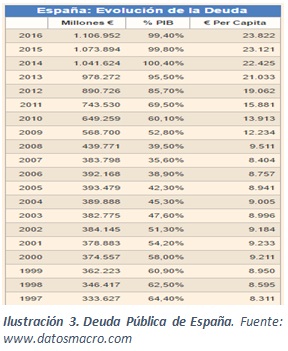 National Debt and GDP. It is clear to see that the nominal debt was restrained between 1997 and 2007. As GDP grew by double over this period, public borrowing as a percentage of GDP fell to 35.6%. In other words, with just over a third of the wealth produced in a year, all of the debt could be repaid, which indicates a good level of solvency or capacity for repayment. From 2007 onwards, public borrowing rocketed, with annual growth rates far above the rises in GDP. As a result, in 2016, the National Debt was equivalent to 99.4% of the year's GDP. As such, the wealth generated in a whole year is needed to pay back all of the National Debt. Obviously, Spain has lost solvency and financial credibility by becoming overindebted. Moreover, the future trend seems to be increasing use of borrowing by the State.

Comparing the National Debt per capita in Figure 3 with the GDP per capita in Figure 2, we can clearly see how the individual solvency of citizens has worsened with respect to borrowing over which they had absolute no decision, as it is decided by the current Government in the State's General Budget.

Spanish household debt. While the Spanish State has increased the National Debt to levels of almost 100% of annual GDP, the financial conduct of households in recent years has moved in the opposite direction. There has been a gradual decrease in the nominal amount of household borrowing, with families managing to take advantage of the lower cost of mortgage instalments due to the interest rates in order to repay the outstanding debt more quickly. 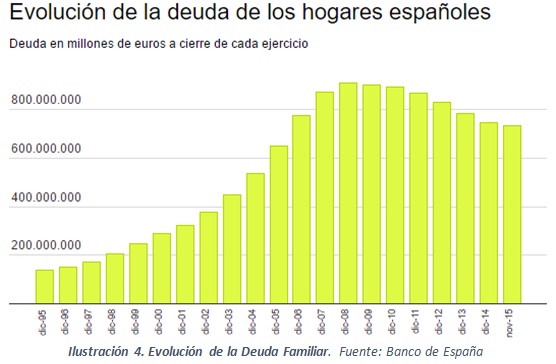 Reasonable borrowing should be taken to mean a level that meets at least two criteria. The first is that the repayments do not exceed a certain proportion of our capacity to generate the wealth that we will use to repay the debt, bearing in mind that we also have to allocate resources to the consumption of the everyday goods and services that we need, as well as saving a little for the future if possible. Secondly, the goods and services that we spend the borrowed funds on must provide a return or benefit higher than the associated cost or sacrifice. Otherwise, borrowing will be financially disastrous and lead to bankruptcy for individuals, households and even the State itself. When we refer to public borrowing, the return or benefit must be seen as an increase in the quality of life of the citizens, who bear the burden of their part of the National Debt.

How can we measure and evaluate whether the investments in goods and services made by the State using its own resources and public borrowing have a positive impact in terms of increasing the sensation of wellbeing across the State by the region's inhabitants? The Organization for Economic Co-operation and Development has designed an indicator that it refers to as the Index of Sustainable Economic Wellbeing to determine the wellbeing of each country at different time, based on certain parameters. The data is shown below in Figure 5. 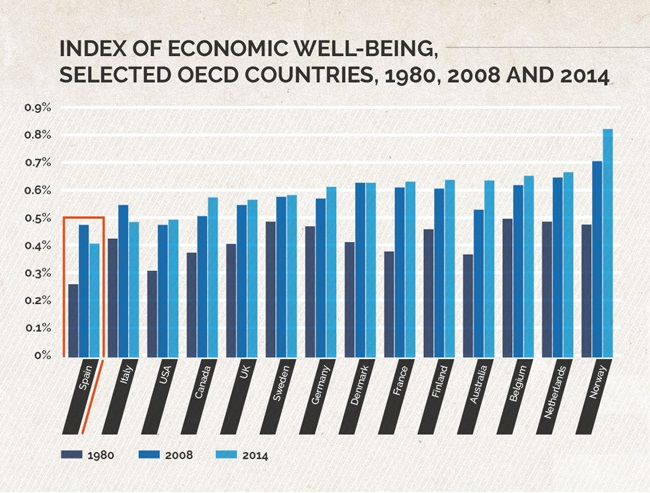 As we can see from this diagram, the level of economic wellbeing in Spain rose very significantly between 1980 and 2008, which was logical and to be expected as the country underwent extremely considerable development during this period. Interestingly, however, from 2008 to 2014, the level of economic wellbeing decreases slightly when, during this period, the country registered record levels of National Debt, which multiplied by 2.4 times, and households made efforts to reduce their level of indebtedness.

If the extreme public borrowing undertaken in this period was not perceived by the population or the OECD as an increase in social and economic wellbeing, then what has the State been spending our money on? Because there was far greater National Debt in 2014 but the wellbeing was in decline. The diagram also shows that there are countries that have recorded increasing growth in their Economic Wellbeing Index, or at least they have maintained levels of growth. So, if this is possible, what is happening to Spain?

The breakdown of the composition of the factors that make up the Economic Wellbeing Index, designed by the OECD are shown in Figure 6 below: 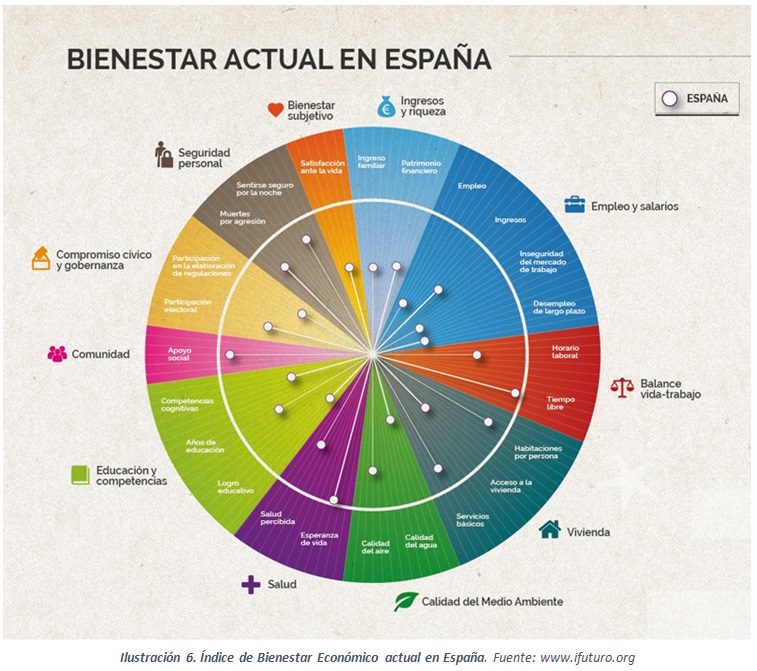 In view of all of the above and, first and foremost, the interrelation of the magnitudes in question, the following conclusions and inferences can be drawn:

The relations between the magnitudes discussed here are far more complex than they have been presented. The objective of this article is not so much academic rigour but rather an overview of certain interdependencies and contradictions in the economic and financial context that we are currently experiencing to an intense degree, in a way that can be understood by a wide spectrum of readers.

Oil takes a drop after the breakdown in Qatar's relations with Saudi Arabia, Egypt, United Arab Emirates and Bahrain