Home Current Affairs News Due to Covid-19, the number of companies with staff working from home has risen to 88% compared to 4% before the health crisis
EAE News - Sala de prensa

Due to Covid-19, the number of companies with staff working from home has risen to 88% compared to 4% before the health crisis

EAE Business School has published a report entitled ‘Work productivity and work-life balance, 2020’, produced by the lecturers Cristina Gallego and Magalí Riera, which reveals that Covid-19 has led to the number of companies with staff working from home rising to 88% compared to 4% before the crisis. If we take into consideration those who only used to work from home once a week, the figure is 5%. Both these percentages are in line with the average for the European Union. However, 14% of workers went online when they got home to keep connected for work-related reasons. 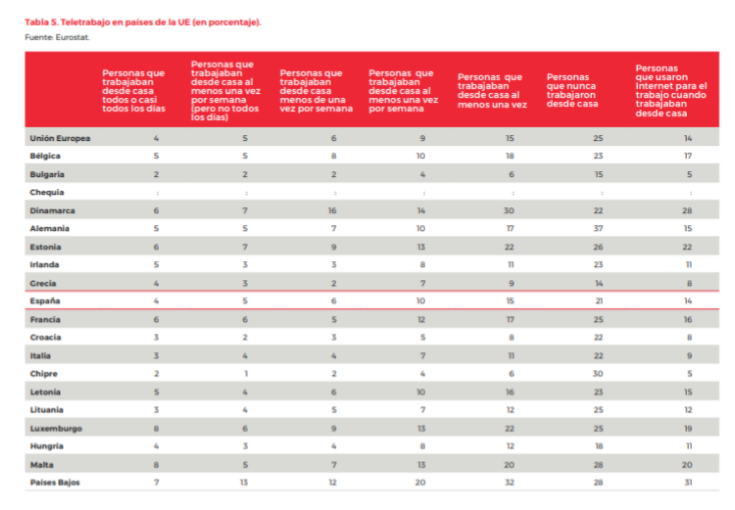 “The current situation may trigger an acceleration in the option of working from home in all sectors in which it is a possibility. This process of change will occur in both the private and public sectors. This situation will show that working remotely is a real possibility, despite being so limited to date, when the productivity rates for these weeks or months are published”, explained Riera, one of the authors of the report.

PRODUCTIVITY IN SPAIN, THE EUROPEAN UNION AND THE WORLD

The report also analyses productivity in Spain and the European Union. At the end of 2019, a 0.3% drop in productivity was forecast for the EU. Three months later, after the events that have taken place, this prediction has been revised to a fall of 1.4 points. “Moreover, as a result of this situation, although we still have to be cautious with our forecasts, in terms of the impact of Covid-19 on the labour marker, between 240,000 and 1.4 million jobs may be lost. This will lead to an unexpected economic and employment situation that will worsen the already concerning downward trend in Spain in terms of participation of GDP in relation to the PPP”, explained Gallego, the co-author of the report.

However, according to statistics published by Bloomberg, the potential impact of Covid-19 on the economy depends on how the outbreak develops. In the scenario of a global pandemic, the GDP of the United States is expected to fall by 2.4%, and the GDP of Russian by 4.8%.

The countries with the best work-life balance are, in first place, the Netherlands, with a score of 9.5 out of 10; Italy (9.4), in second position; and Spain and Denmark (9), in third. At the other end of the spectrum, Colombia is the country with the lowest score for work-life balance, with 0.9, followed by Mexico (1.1) and Turkey (3.1).

To prepare this ranking, the following data was taken into account. Mexico and Costa Rica are the countries with the longest working days, with 48 hours worked per week in the case Mexico, equating to 2,148 hours per year, followed by Costa Rica at 2,121 hours per year. In contrast, Germany and Denmark are the countries with the lowest number of hours worked: 1,363 and 1,392 hours per year, respectively. Italy has the most hours per day dedicated to leisure and personal care (16.47), followed by France (16.36) in second place, and Sweden and Spain (15.93 hours) in joint third. Next in the ranking come Denmark (15.87) and Germany (15.62). 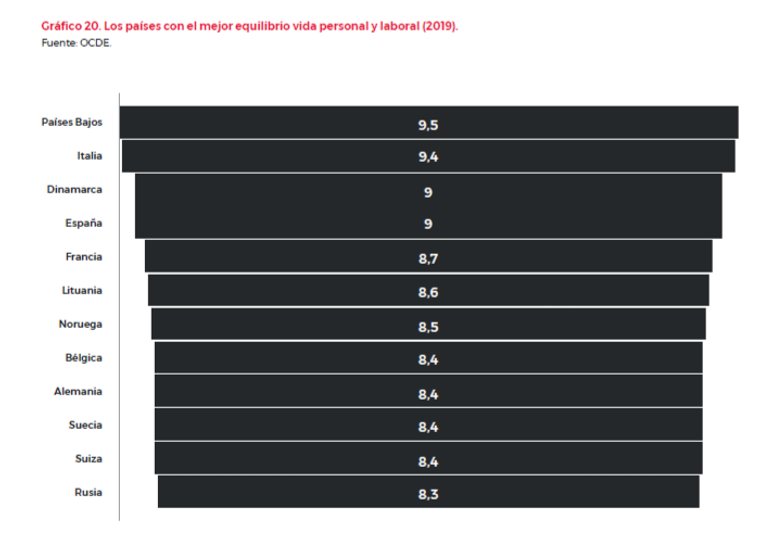 “Spain scores well in terms of the time dedicated to leisure and personal care, but also because the percentage of the population with long working days has dropped to around 4%”, explained Magalí Riera, the co-author of the report.

However, the perception of satisfaction is higher in Scandinavian countries: Finland and Denmark and Norway, with a score of 7.6, climbing a tenth of a point from the year before, followed by Iceland and Switzerland (7.5). Meanwhile, Canada and the Netherlands rank slightly lower, and the top ten is completed by Australia, New Zealand and Sweden, with 7.3 puntos. Spain scores 6.4 in terms of satisfaction with life. The OECD countries with the lowest level of satisfaction are South Africa, with 4.7, and Greece and Portugal, with 5.4. “We have to remember that quantifying this statistic is somewhat subjective, as it is used to measure the feelings of the people participating, which includes aspects such as having the flexibility to strike a good work-life balance, as well as other factors such as the individual’s health, income, education and social conditions, emphasized Magalí Riera.

EAE’s report also reveals that 77% of Spaniards think that employers should make it easier for men to combine work and childcare. Of this percentage, 81% are men and 73% are women. “Traditionally, the role of childcare and caring for relatives have been associated with women. In fact, the figures on part-time employment contracts and the percentage of the population working reduced hours support this assumption. This social convention has become embedded over the decades and is highly related to gender stereotypes and the pay gap. Due to social changes both in the past and present, there is an increasing number of men, as well as many women, who advocate and demand the possibility of balancing their personal, professional and family lives”, explained Riera. 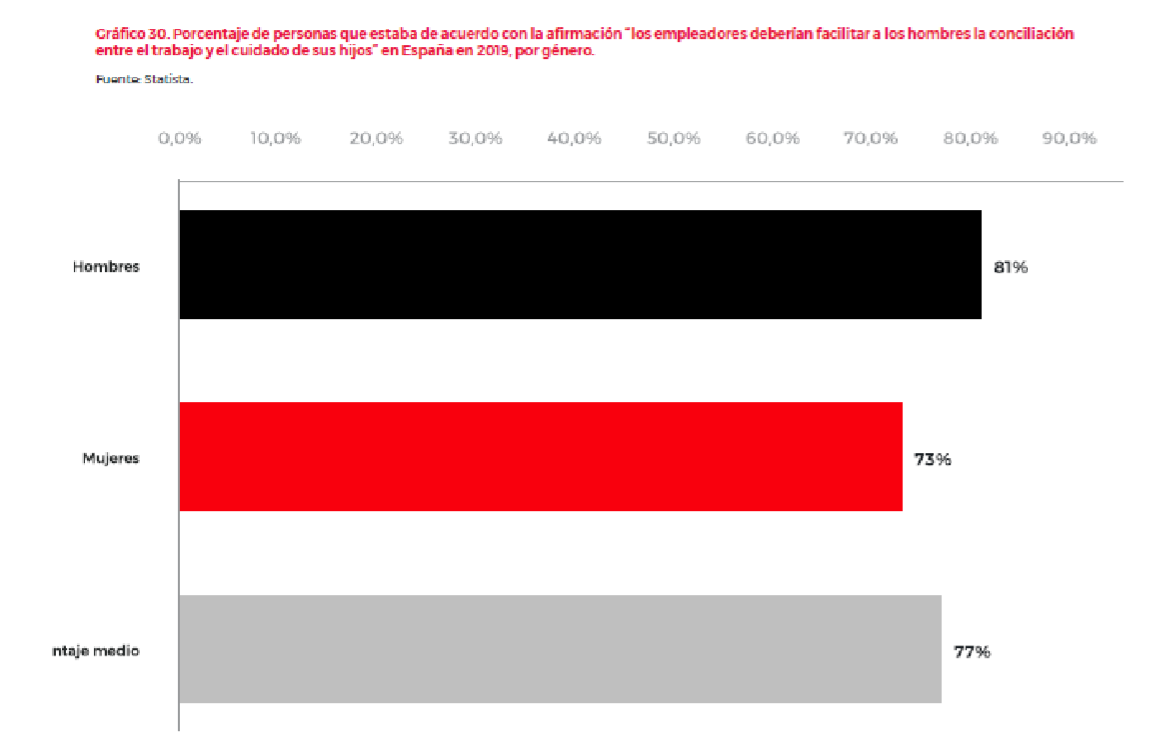 In this respect, there is a huge difference between the genders if we analyse the case of leave from work. Leave for childcare is requested by women in 90% of cases. Leave for taking care of relatives is slightly lower in this respect, with 84% of requests coming from women.

Check our Master in Human Resources and Talent Development

Hybrid Methodology: Personal and professional growth beyond your borders