EAE and 3 Capital publish the report “Redirected Proportional Load: application to the destination of Barcelona”

In collaboration with the consultancy 3 Capital,EAE Business School has published the report “Redirected Proportional Load: application to the destination of Barcelona”, which puts forward a theoretical mathematical model of balanced distribution of the supply of tourist accommodation in a region. Based on the premise of the necessary collaboration between public administrations and the private sector, this model offers a potential solution to the “tourism saturation” experienced in certain destinations.

“The serious impact of Covid-19 marks a turning point and an opportunity to create a new more balanced, sustainable tourism model, to rethink the growth model of urban and holiday destinations, with a special emphasis on coordination between public administrations and the private sector”, explained the author of the report and lecturer at EAE Business School, Tomeu Pons. 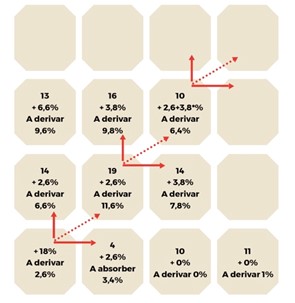 Before the pandemic, this sector was one of the main driving forces of Catalonia’s economic activity, generating revenues of over 21 billion euros in 2019 and accounting for 12% of GDP and 14% of employment, exceeding all types of industrial activity, as shown in the report. In Barcelona, the tourism sector generated over 150,000 jobs directly and indirectly, equivalent to 8.6 % of total employment, as well as being the fourth leading activity in terms of wealth creation (7.3 % of GDP). The city was home to a third of Catalonia’s tourism companies and provided almost two thirds of the jobs in the sector in the region, generating over half the revenue from Catalonia’s tourism tax. These figures underwent a “tragic” drop in 2020, with a 77.3% fall in the number of tourists and an 88% decrease in revenue.

In response to the new context, the report proposed the Redirected Proportional Load (RPL) formula, based on dividing the city into smaller zones that, starting at the centre, spread our shock waves (in this case stress-release ripples) that facilitate a balance of the number of tourist accommodations establishments. When the waves nearest to the city centre reach a certain ratio of tourist accommodation to residential and commercial properties, offices, tertiary buildings, etc., these establishments and the tourism load they place on the region are redirected virtually to the next wave, and so on until they reach the city limits.

“The central areas, with a greater proportion of tourist accommodation, divert their excess load successively towards the next waves until a “free” zone is reached, with space available to create the new supply of accommodation without the risk of upsetting the previously established balance of land use. The sector can then develop from these zones, which need not be far from the centre or lacking in interest for visitors to the city”, emphasized the EAE lecturer, Tomeu Pons.

“Bearing in mind that, in 2019, a tourist staying in the city spent an average of 195 euros on local services such as food, leisure and local transport, the distribution of tourist accommodation across a region creates significant economic flows with a multiplier effect on local businesses because, contrary to what it may seem, tourists spend over 50% of their time in places near to their accommodation”, added Pons.

The report proposes a tourism load ratio of 80% residential properties, 10% tourism establishments, 5% offices and 5% commercial premises. “In any case, the ratio must be aligned and consistent with the neighbourhood’s traditional property uses, with medium- and long-term planning overseen by the public administrations”, explained Pons.

THE CASE OF BARCELONA

Focusing on the application of the model to the case of Barcelona, the report reveals that the administrative restrictions on creating new tourist accommodation places imposed in recent years have “particularly benefitted the hotels already established in the city, which have unexpectedly reinforced their position due to the huge obstacles that the regulations pose in terms of the entry of new competitors”. As it has been impossible to create new supply, coming to agreements with existing establishments has become the only way to enter the market, which has generated “a perverse effect of speculative property appreciation and sudden inflation in the investment market, which, rather than coming from the improved efficacy of internal management, has been facilitated by the public administration”, explained Pons.

The fact that new players cannot enter the field, especially high-end international chains, has other consequences, according to Pons, such as “sacrificing the city’s capacity to attract visitors with high spending patterns and consumption beyond their accommodation”. “These chains also have innovative management models and higher staff to guest ratios than average, contracting local and international talent at considerably higher salaries” he emphasized.

“In the long term, this phenomenon may have an impact on tourist segmentation in Barcelona, as international visitors with the highest spending power (especially North Americans and Asians) partly base their choice of destination on the variety and supply of recognized, respected hotel brands, as well as certified complementary services”, warned the EAE lecturer. “The top segment of demand has greater multiplier effects for local companies, operators and small and medium enterprises, which have been hit particularly hard by COVID-19”, added Pons.

At this point, the expert highlighted “the contrast with the city of Madrid which, even during local administrations with similar political inclinations, allowed prestigious international chains to enter the market, which would otherwise have opted for Barcelona as their first choice in Spain”.

The report also mentions other factors, such as the recent ratification of the annulment of the Special Urban Plan for Tourist Accommodation (PEUAT) by the Catalan High Court of Justice”, which the author of the report sees as “an opportunity to promote the joint negotiated planning of the future”. “Otherwise, it is very likely that stakeholders in the hotel sector will take the initiative and claim significant compensation from the public administration, hindering the desired harmony and full recovery of the sector even further”, he concluded.

Javier Saviola: “The change has been really good for Luis Suárez, with the motivation of coming to a totally new club”