Government forecasts are positive for employment and the economy

By Martí Pachamé, a lecturer on the Master in Financial Management and the MBA at EAE Business School

The government forecasts presented in the Stability Program of the Kingdom of Spain (2017 – 2020), could not be more optimistic. Now, they just need to prove to be realistic.

The stability Plan encompasses a number of key objectives:

With these forecasts, the Government expects the public deficit to fall below 3% in 2018. It must be highlighted that this improvement in the public accounts is set against the an extremely favourable macroeconomic backdrop, economic growth in neighbouring countries, the price of a barrel of oil, the expansive monetary policy of the ECB and the consequent weakness of the euro, all factors that, together with the reforms implemented by the Government, have enabled the current recovery.

It is the structural reforms that mark the difference between Spain and our European counterparts. The external conditions have the same positive impact on everybody and the fact is that Spain has been, is still and in the short term expects to continue growing above the European average. It must be said that, historically, Spain has behaved in this way – when it grows its does so above a proportional level, with the same happening in the opposite direction in times of recession. Depending on production structures that are closely linked to the economic cycle condemns us to an extremely volatile pattern of development.

Something similar is happening with the unemployment rate. The forecast is that Spain will reach 2008 levels of 11.2%. While this rate should give cause for satisfaction as it means a reduction in the unemployment rate to half the level at its most critical point, it corresponds to an inefficient production structure and an extremely rigid and bureaucratic model of employment relations. We must be doing something wrong if the fluctuations in the unemployment rate in other countries are less dramatic. As the following graph shows, the trend in employment should be the Government's main concern and not only for electoral reasons. Resolving this differential with respect to our EU partners would give us a robust anti-cycle component, acting as an automatic mechanism for buffering excesses. The best option for Spain would be losing our status as the champions of economic recoveries to become another one of the 'grey' Central European countries. 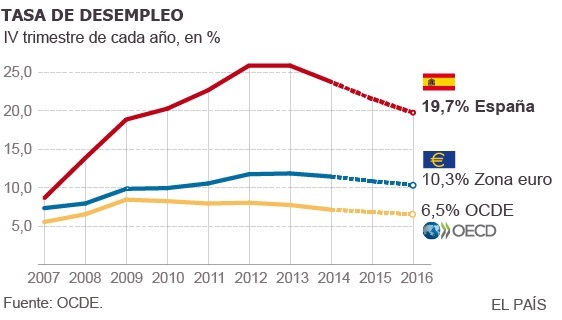 "Every time a company selects a candidate, it takes on a risk, which we try to minimize with the help of headhunters"

EAE presents the new developments of the Master in Journalism and Digital Communication, with professional certification from Grupo Atresmedia