Home Current Affairs News Isidro Fainé: “A true leader is authentic. You can trust in their word and their intentions. They learn from their mistakes and set an example”
EAE News - Sala de prensa

Isidro Fainé: “A true leader is authentic. You can trust in their word and their intentions. They learn from their mistakes and set an example”

EAE Business School has held its Graduation Ceremony, for the Bachelor Degree and Master students of the graduating classes of 2020 and 2021. The Ceremony was held in a hybrid format at the studios of Atresmedia and was presented by the journalist and EAE graduate, Helena Resano, and the Antena 3 presenter, Roberto Brasero. The Chairman of the Fundación “la Caixa”, Isidro Fainé, was the patron of the two graduating classes.

The patron was introduced by the President of Grupo Planeta and Atresmedia, José Creuheras. In his speech, the Chairman of the Fundación “la Caixa” and patron of the Graduation, Isidro Fainé, focused on the figure of the leader. “A true leader is authentic. You can trust in their word and their intentions. They learn from their mistakes and set an example”, explained Fainé. He also emphasized that a leader must be guided by “a set of ethical values”. In this respect, a leader cannot be anybody “manipulative or chaotic”.

Fainé the highlighted that “without leaders, it is difficult to achieve economic progress”. “A leader’s authority comes from their confidence in their collaborators, in their capacities and intentions, and from the trust that they inspire from their stakeholders. Leaders lose their authority is they misuse you”, he explained. “Leaders know how to spot market opportunities and anticipate them in advance”, he added. 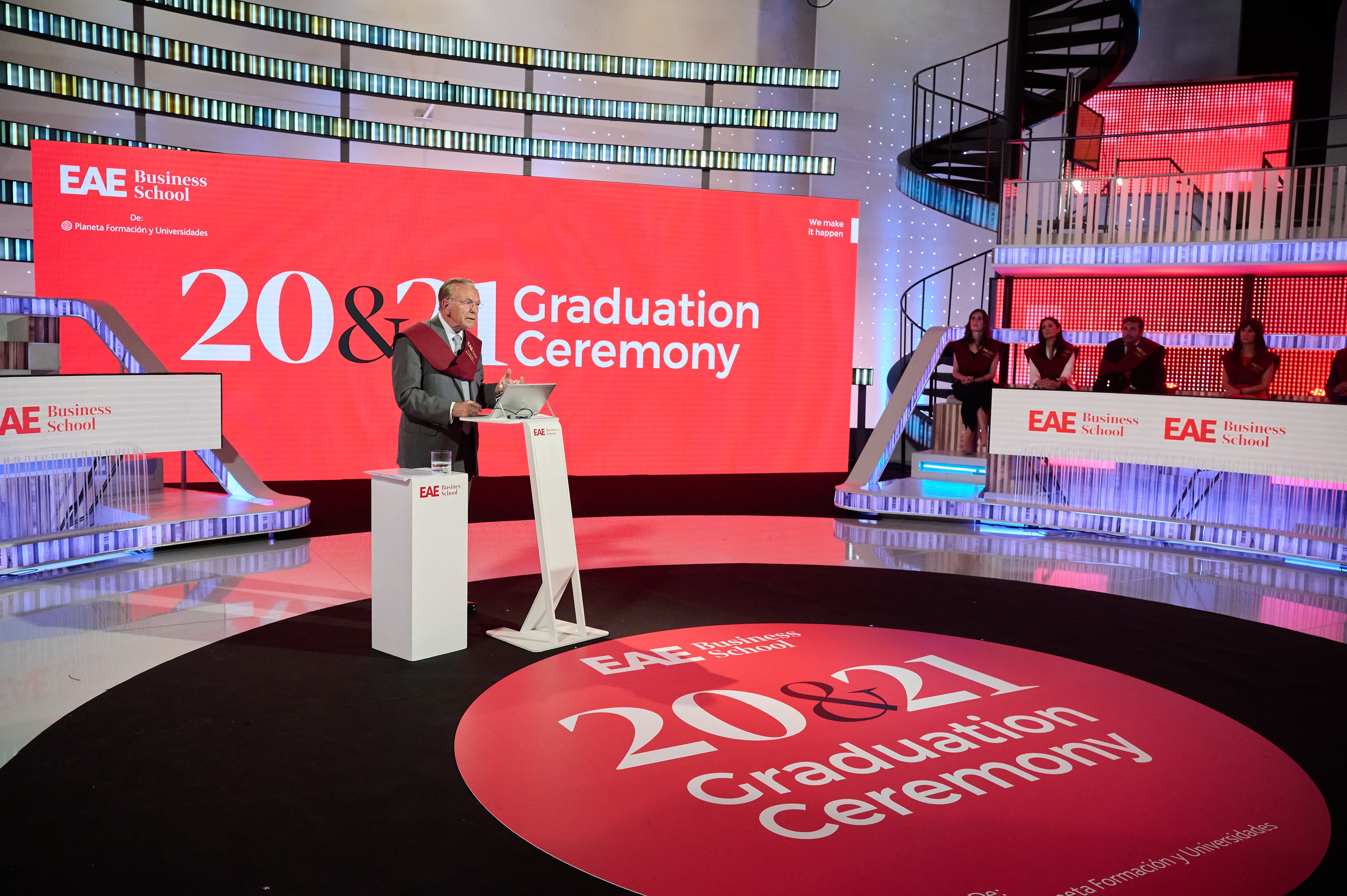 The Chairman of the Fundación “la Caixa” also discussed what he considers to be the biggest challenges of modern society: overcoming the pandemic and its effects, climate change, digitization, the ageing population, the fight against inequality and the high level of government debt that makes them “fragile”.

In his speech, Fainé encouraged EAE’s new graduates that, on their new professional journey, they should remember that “opportunities exist, we just have to discover them and bring them to life”. All this will “give us the opportunity to feel useful, have a meaningful life and contribute towards building a better society”, he concluded.

In this respect, at the end of his presentation, the Chairman of the Fundación “la Caixa” said that “the ultimate function of companies and, therefore, of executives and businesspeople, is social progress”. To contribute towards this progress, he encouraged the students to “believe in your potential and act decisively, with courage but also caution, with humility but also self-belief, embracing the future with optimism and always underpinned by values”.

He has a PhD in Economics Sciences from the University of Barcelona, an ISMP in Business Administration from Harvard University, and a postgraduate degree in Senior Management at IESE. He is the President of the Spanish Confederation of Directors and Executives (CEDE), Vice-President of the Royal Academy of Economic and Financial Sciences and a permanent member of the Royal European Academy of Doctors.

The graduation held on 21st June also welcomed the participation of the CEO of Planeta Formación y Universidades, Carlos Giménez, and the General Director of EAE Business School, José Luis Fernández, as well as the Dean of EAE, Josep Maria Altarriba and the Director of Professional Careers, Carmen Martos.

Over the course of the academic year of 2020 and 2021, 16,000 Master and Bachelor Degrees students have graduated from EAE Business School. 72% of EAE’s graduates are international, coming from over 100 countries on all five continents.

Reasons to incorporate Design Thinking into your studies

The Road to Workforce Diversity