“Our participation in EAE Lab has helped us shift from a student mindset and activate our entrepreneur mindset”.

We talk to them about the current status of the company, as well as their experience in the EAE Lab incubator, and they shared the following impressions:

Tell us about yourselves. Where are you from? What are you studying at EAE Business School? What are your passions?

Juan Miguel Da Silva is from the Philippines. He is keen on photography and playing ultimate frisbee. He has 6 years’ experience working for Coca-Cola in his country. He joined the company as a financial analyst and went on become the Commercial Information Team Manager, before finishing his time at the company as the Trade Marketing Manager. This experience enabled him to gain insight into the bottled water market, its costs, production and the way that this kind of products is sold. He left Coca-Cola to take the International MBA at EAE Business School in Barcelona.

Juan José Márquez is a film and music lover from Mexico. He has 9 years’ experience working on industrial design projects. He worked for 3 years as a project manager in an international agency before developing his own social entrepreneurial venture that he has been working on for 5 years. He left his company to take the International MBA en EAE Business School en Barcelona.

Diego Figueroa,is from Peru and enjoys cooking and video games. He has over 8 years’ experience at BBVA, working as a commercial specializing in banking, before becoming the sub-manager of operations, successfully leading 2 teams. He left BBVA to take a Master in Innovation and Entrepreneurship at EAE Business School in Barcelona, where he created the entrepreneurial team with Juan José and Miguel. 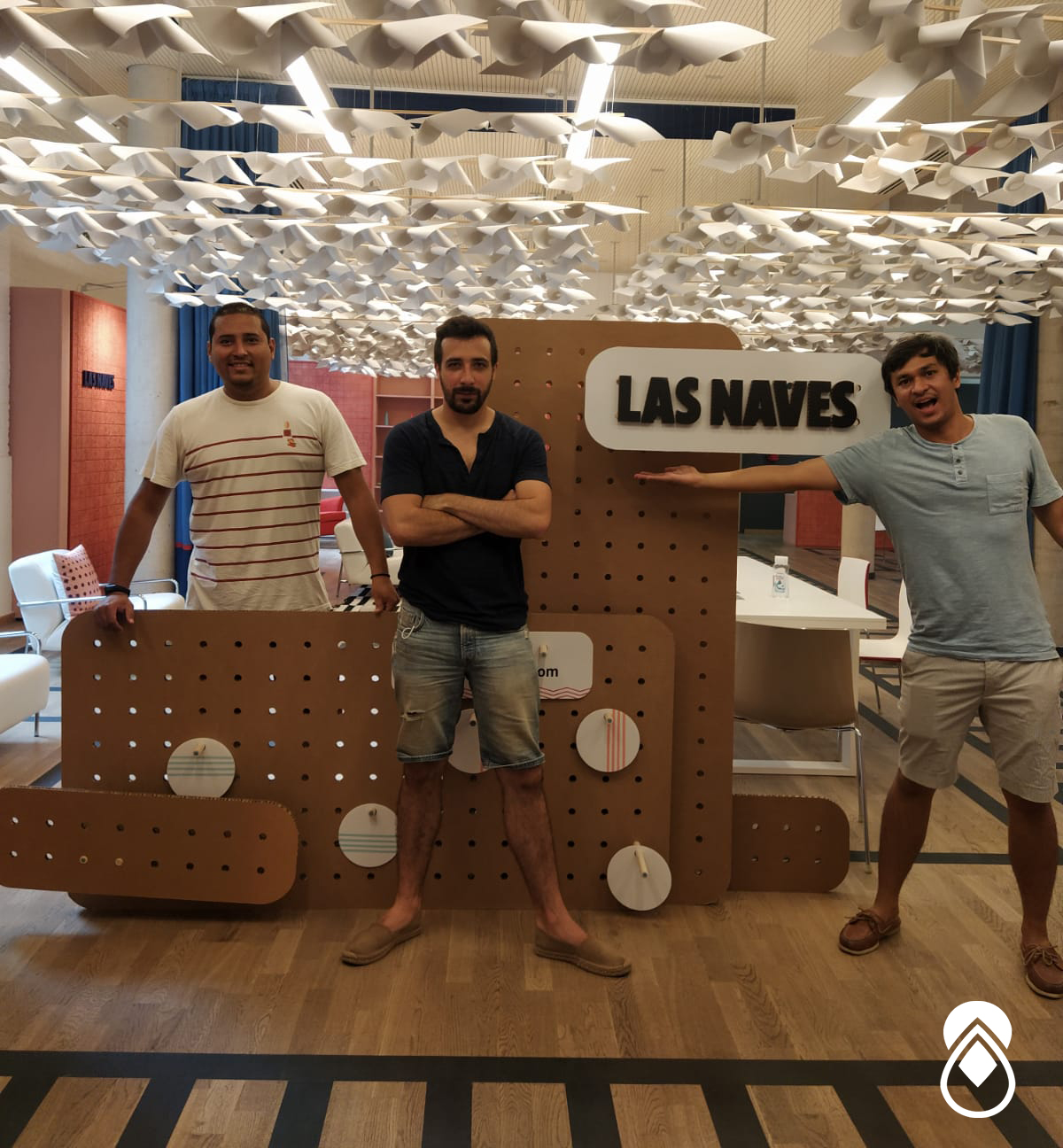 Turning to entrepreneurship, how long have you been in this world? How did this desire to create your own project emerge?

Near to the end of our respective studies at EAE Business School, we met up a couple of times and, over a few beers and tapas, we had some intense conversations about what would we each be doing after we completed our programs, and we came up with the possibility of forming a team to launch to launch an entrepreneurial venture, The problem we focused on right from the start was related to the waste and pollution generated by bottled water consumption. This is how Juanjo and then Miguel decided to join the adventure with Diego.

Over the months of May, June and July 2019, we met up midweek, primarily with the aim to start to test how we work as a team and how compatible our characters are. Our first objective was then to apply for the call for applications for EAE Lab, the entrepreneurial project incubator of EAE Business School.

After meeting a series of requirements, gathering information and having a few interviews, we were officially selected, and we started the program in October 2019.

Tell us about the project that you are developing in EAE Lab? What does it involve?

Jibu H20 is a solution that implements refilling stations in public and private spaces connected to a mobile app that enables geolocation and consumption traceability, as well as commercializing a reusable bottle. The refilling stations have a powerful visual aesthetic appearance that grabs the user’s attention and inspires confidence. The filtering system ensures the best tasting water and the option of reducing the user’s interaction with the refilling station through a touchless system.

We aim to generate a positive impact by conveying the message that “here, we drink water without plastic", thereby bringing together our clients (organizations that own the spaces) and end users. Therefore, every time a refilling station is used, we prevent anything from polluting the planet. We answer the question of how to promote responsible water consumption, reduce the amount of waste and boost people’s healthy habits through optimal hydration. 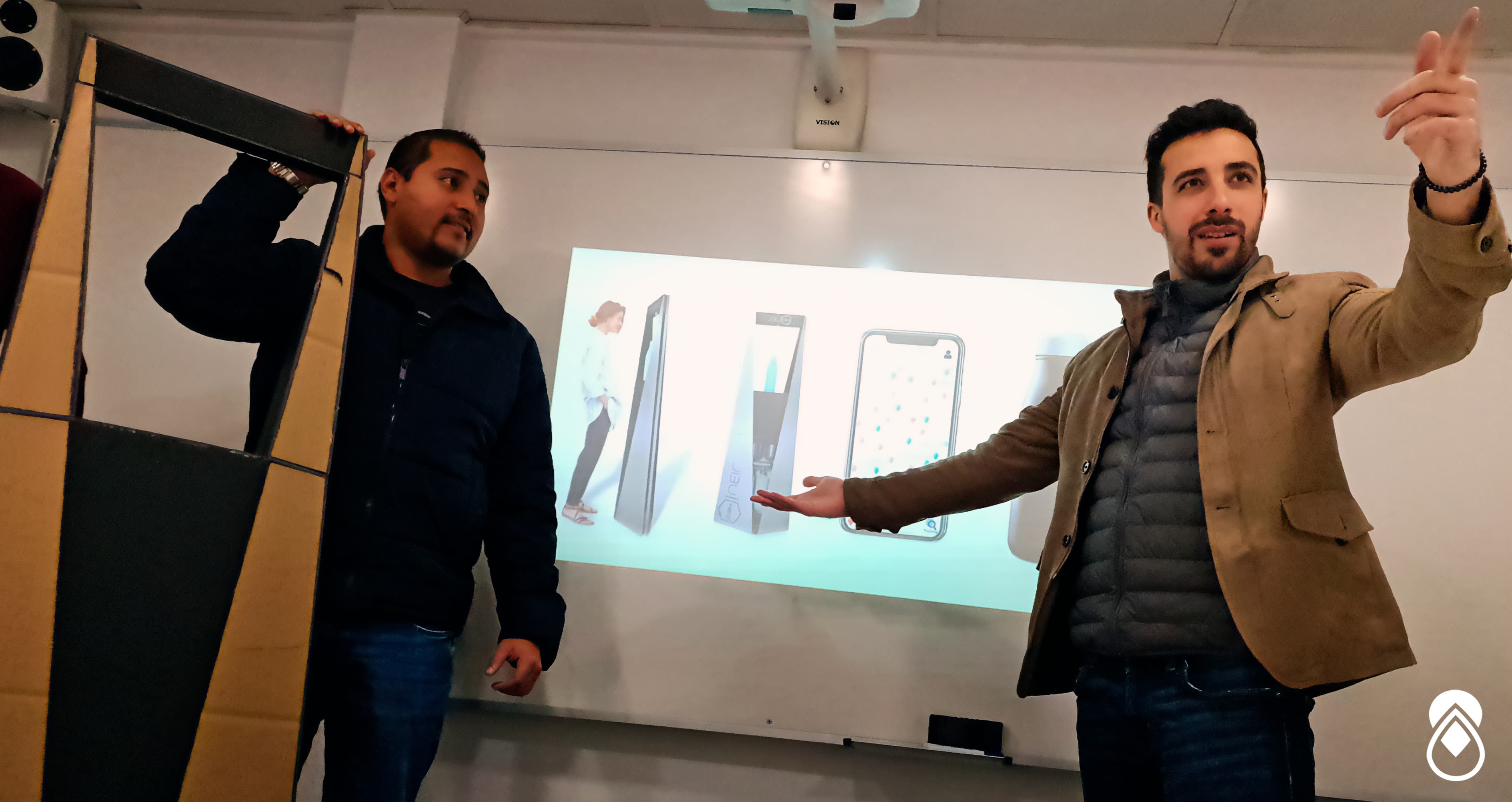 What has the experience in the EAE Lab been like? How has it help the development process of the project?

In short, our participation in EAE Lab has helped us to shift from our student mindset and activate our entrepreneurial mindset. Moreover, the experience of working alongside other projects and people really enriched our experience, adding lots of value to the day-to-day work that we put into developing the project. Sharing different issues with one project or another, discussing progress, chatting and listening to the points of view of the program mentors and coaches, helping or getting feedback from colleagues working on a totally different project and being in communication and, to a certain extent, indirect competition with the other projects in EAE Lab has led to a significant step forward in our venture and we are really grateful.

Compared to a year ago, what situation is the company in? Tell us a bit about the evolution of the project.

It has honestly all changed. The project as a whole still responds to the same problem, but the solution has changed a great deal compared to the one we presented when we joined the program, due to the constant testing, validations and iterations that we have done in this time.

Looking back a few months now, EAE’s Demo Day was about to happen and we had high expectations. After a full-on day of preparations for Demo Day, they told us that the office might close for two or three weeks. It was 12th March. Just like for everybody else, the lockdown was a hard blow. All our pilot plans and tests were shelved and we couldn’t get on with much else, as the prototype and the production of the new model was also stopped.

So, we implemented a remote working systems with set timetables so that we didn’t lose our thread. We managed to complete the written business plan and hold more virtual coffee sessions with different stakeholders, including water bottle companies. We focused on applying for competitions and incubators, getting financing and working on the plan to set up the company. It was a really challenging time but, all in all, we managed to make the most out of it. During this period, we knocked on a lot of doors and two really some interesting ones opened up: Col·lab and Bevu.

We have recently been picked, along with 14 other innovative proposals, to take part in the second edition of Col·lab, the public accelerator of the Valencia City Council’s Las Naves innovation centre. This edition is aligned with the #MissionsValencia2030 goals, the social and urban innovation strategy for the city of Valencia, which is a flagship of the EU’s European Horizon project, which experiments with a research and innovation governance model in Valencia that focuses on missions to improve people’s lives. As such, it would be a great support for Jibu H20 and its team of founders.

In our search for companies that share our values, we spoke to Ana Carrasco, the CEO of Bevu, an American company that manufactures reusable designer bottles. They have given us a letter of intention, validating our solution with this kind of company and accrediting the potential for future collaborations to boost the existing bottle-fountain relation.

Resuming our activities after the lockdown caused by Covid-19, we managed to complete the production of the second prototype to run the pilot originally planned for the 23/04 in the city of Mataró in collaboration with the company Aigües de Mataró. The company now plans to implement the pilot in August with the aim of gathering more information about people’s interaction when using the machine and how they perceive a public drinking fountain system. Based on this information, we plan to make a formal proposal to implement a number of refilling stations in various locations in Mataró in 2020.

In the incubation progress, you receive an extensive program of business mentoring. What lessons that you learned from these sessions would you highlight?

When we started at the Lab, our idea was presented and dismantled to start with only the problem itself, so that we could use different methodologies, such as Effectuation, that the Lab taught us for identifying the needs of users and potential customers, as well as real capacities of the team, our motivations and the connection between us, everything we need to be able to execute this project effectively.

The opportunity to share our small advances with our mentors and see how things started to come together as a work team is part of what you do in EAE Lab. The chance to strengthen our communication and work strategies is hugely important.

In terms of economic guidance, how did EAE Lab help you design a financial plan for your idea?

We had a mentor specializing in the financial and economic guidance aspect, giving us their insight based on their experience so that we could validate and find a profitable model for the project. It is hard but we would reiterate that it has been really useful to do this in the early stages so that we can factor in lots of variables that come up along the way. 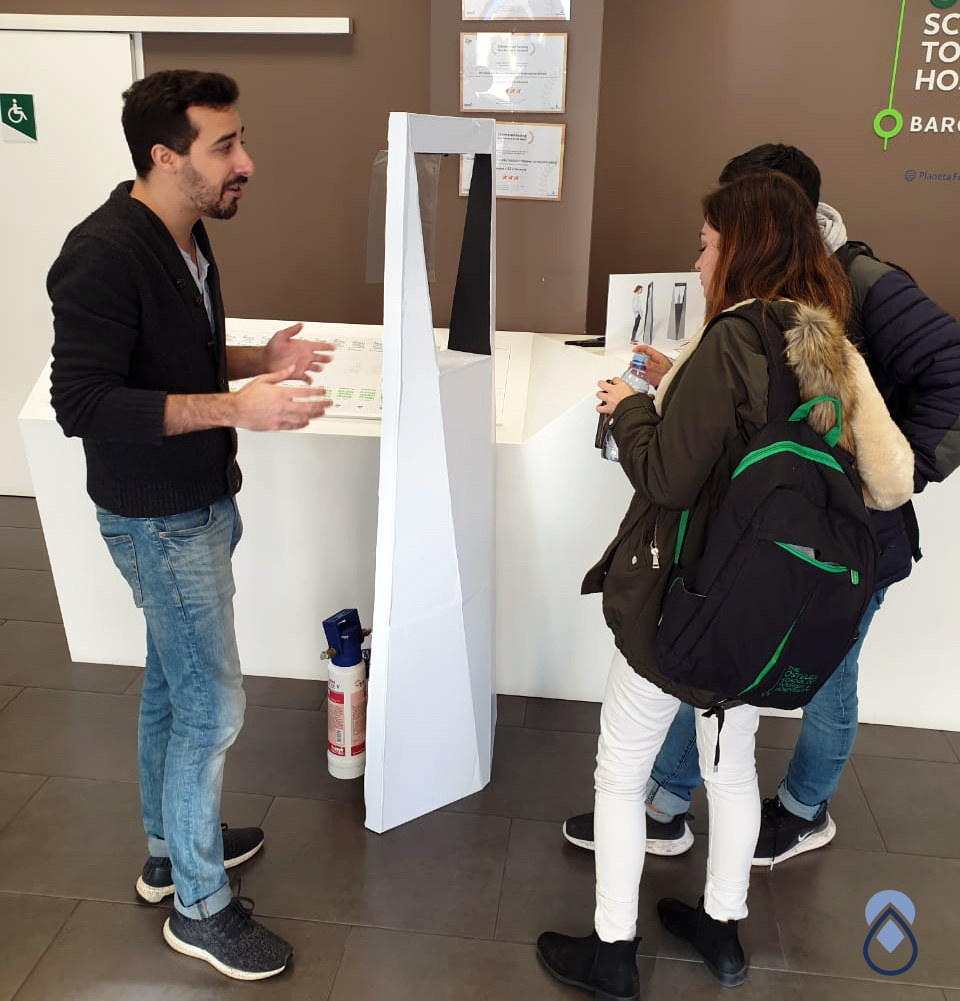 Did you find the networking platforms and events organized by EAE Lab useful? Why?>

After testing it with different people in various places, including the facilities of Ostelea and EAE Business School, we made certain changes based on the information gathered and created the first MVP, which used similar materials and finishes to a final product, as well as a mechanism that simulates the machine’s function. With this prototype, we began a second series of tests with potential users to validate both the functionality and design.

We did all this without the possibility of accessing facilities and people and, in itself, the option of running real tests worked thanks to the support of EAE Lab and the School.

At a personal level, what have you liked most about EAE Lab and why?

The concept of the project incubator and the accompaniment that this program gives to the teams in the early stages is really important. To see that, we just have to observe the constant progress of the teams in the security of a pitch to the mentors, students or potential customers that visit the Lab to find out about the projects. Ultimately, there is no recipe to ensure a project will succeed, but the ingredients that EAE Lab gives us help us avoid failing in the attempt.

What recommendations would you give to any entrepreneurs studying at EAE Business School?

To anyone considering launching an entrepreneurial venture, who has a project in mind and the possibility to take part in this program of EAE Business School, I would tell them to take the plunge and do it! It is an environment that gives you a great deal, where you can check the temperature and the compatibility of the team (which is extremely important in our opinion), and ensure they share the right reasons for doing it.

From social media to chatbots: A decade of evolution