Six Masters run by EAE Business School have been ranked among the best in Spain this year in the ranking prepared by the newspaper El Mundo, matching the levels of recognition obtained in 2016. For the sixth year in a row, the Master in Corporate Communication Management is ranked as the best master run in Spain in the field of Communications.

The programs run by EAE Business School also classify among the best in the areas of Logistics, Marketing, Human Resources, Commercial Management and Finances. The last of these has even climbed in the ranking to be named as the second best Master in the field of Finance in Spain. As such, a total of six masters have been named in this league table of postgraduate tuition drafted by the newspaper El Mundo 2017. This figure matches the total achieved in the previous year, with the School therefore maintaining the level of acknowledgement received.

The ranking names the 250 best masters chosen from a selection of over a thousand options. The decisions are based on 25 criteria divided into five areas: demand for the master, human resources, study programme, results and material resources. Moreover, the assessors have the help and opinions of 800 experts, lecturers, students, graduates of the programmes themselves and partner companies.

The Master in Corporate Communication Management is named as the best Communications Master run in Spain, ahead of the programs offered by the Universidad de Navarra and Cesma. Having ranked among the top programs for more than a decade, this is the sixth year in a row that it holds the top spot, reaffirming its leadership in the sector.

The Master in Financial Management has been ranked this year for the first time in its history as the second best Master in Spain in the field of Finance. El Mundo highlights the opportunity that EAE gives its students to take part in an International Residential Program at the University of Quebec (Canada) at the end of the tuition period, and the fact that 91% of graduates find employment within six months. See the Full-Time Master and Part-Time Master for Executives.

The Master in Marketing Management has been named as the second best Master in the field of Marketing in Spain. The ranking highlights the program's Advisory Board, comprised of executives from companies such as Unilever, Mango, Heineken, Nielsen, BP and Sony, among others; and the creation of a Marketing Plan. See the Full-Time Master, Master 100% in English and International Master.

The Master in Operations and Logistics Management is classified as the best Master in the field of Logistics run in Madrid and Barcelona, and the second best in Spain. Among other key factors, the ranking emphasizes the fact that the program is designed to enable students to pass the examination for the SCMPro Level 1 certification of the Council of Supply Chain Management Professionals. See the Full-Time Master, International Master and Part-Time Master for Executives.

The Master in Commercial and Sales Management reaffirms its status as the best program run in Barcelona and the second best in Spain, with its highlights including the international placements offered in the United States and Europe, thanks to agreements in place with institutions in more than 30 countries, as well as the creation of a Commercial Action Plan. See the Part Time Master for Executives. 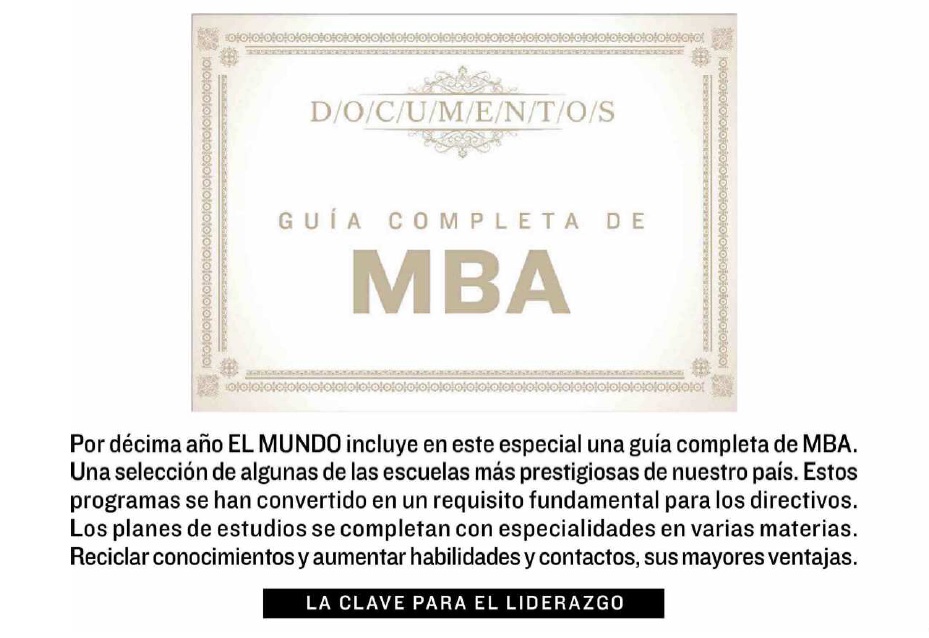 El Mundo also includes an MBA guide, which has highlighted the School's International MBA, which includes a semester within the tuition plan at Shanghai University or Pace University/Lubin School of Business in New York, as well as the Global Executive MBA, Executive MBA and Full Time MBA. In this section of the ranking drafted by the newspaper El Mundo, particular emphasis was placed on the implementation of the North American methodological system, based on Majors and Minors, for the first time in Spain, replacing the traditional method of choosing elective courses.The implementation of this new system gives students access to the North American system so that they can achieve greater advantages in terms of employability.

Moreover, the ranking highlights the fact that EAE is a member of the Executive MBA Council (EMBAC), thanks to which all of EAE's Executive MBA meet the academic and quality standards required by this association.

The Acquisition of Banco Popular