Home Current Affairs News Which professional positions are in the highest demand and the hardest to cover in Spain?
EAE News

Which professional positions are in the highest demand and the hardest to cover in Spain?

“The sixth edition of the EPyCE Report reveals that the positions in the highest demand and the hardest to cover are dominated by the categories of Technology, Engineering and Sales”.

EAE Business School, in collaboration with the AEDRH (Spanish Association of Human Resources Directors), recently published the EPyCE Report 2019, which gives a comprehensive overview of the positions and competences in the highest demand in the Spanish labour market.

The impact of digital progress and the big transformations under way at a business level have generated a professional panorama that is a constant state of change. The EPyCE Report 2019 aims precisely to identify these changes through research, with the goal of monitoring the evolution of the professional world, thereby enabling us to provide more effective support to the students of EAE Business School and all other agents of the labour market.

One of the main points on which the report focuses is the hardest positions to cover, as well as the positions in the highest demand over the next 2 to 3 years. Which are they? Let’s find out.

Categories of positions currently in the highest demand in Spain

According to the data gathered from the interviews with Human Resources directors, the categories currently in the highest demand in Spain are: Sales (26.34%), Engineering (24.19%), Technology (23.12%), Marketing (9.14%) and Administration, Finance and Legal (4.30%). 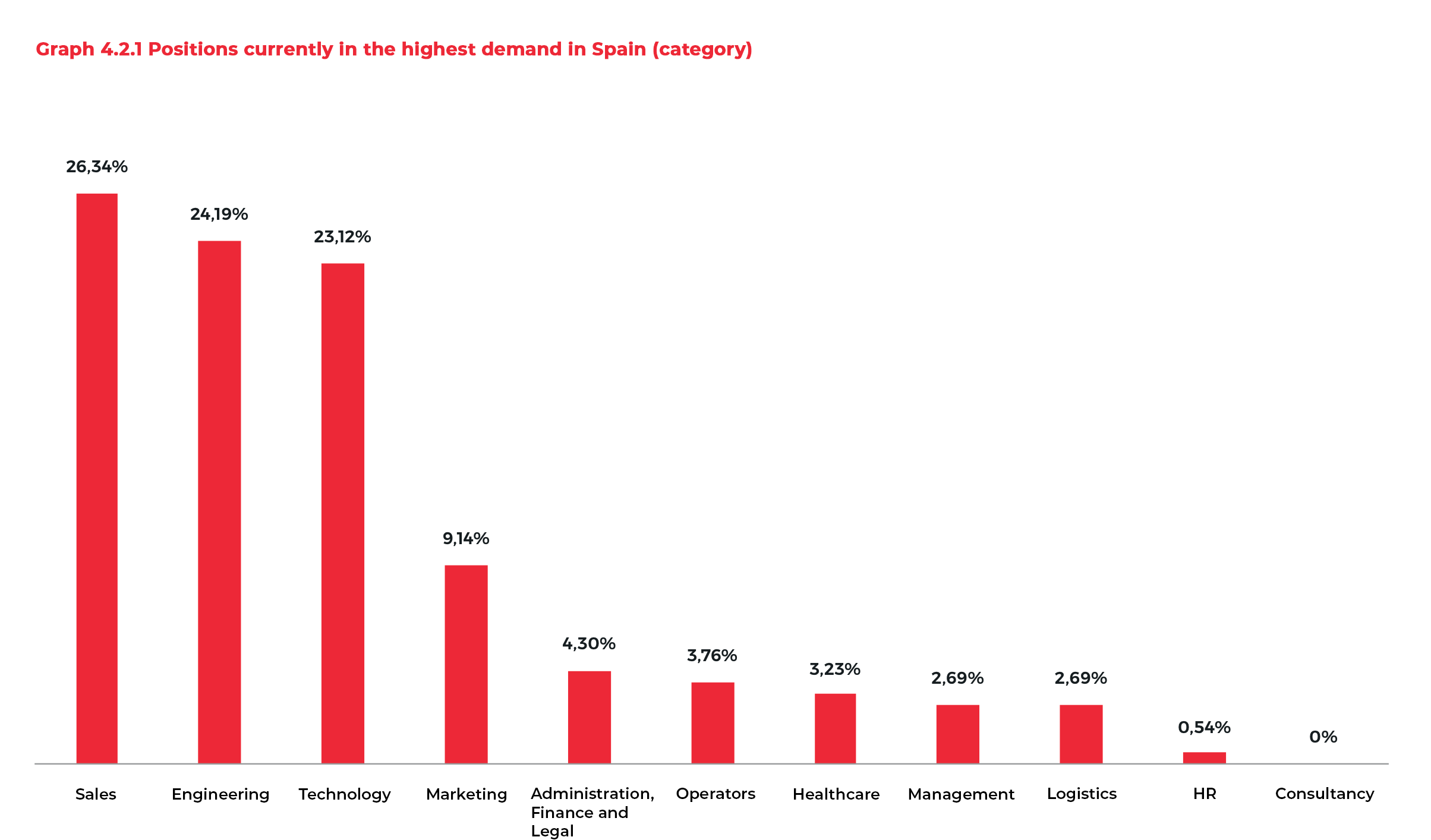 Positions currently in the highest demand

“The 6th EPyCE Report 2019 shows a scenario with future positions that reflect companies’ commitment, not only in terms of digital transformation, but also compliance with the Sustainable Development Goals (SDG)”.

To find out more about the Sustainable Development Goals, click here.

“It should be highlighted that the gap between the Technology and Sales categories continues to grow. Last year, there was a difference of just 13%, which this year the gap has increased to reach 23%”.

If you want to specialize in one of positions in the highest demand in the future, such as big data, find out more about our Máster in Big Data & Analytics

According to the data obtained from the research to prepare the report, the hardest positions to cover nowadays in Spain are also those in the highest demand: Big Data (9.77%), Data Scientist (7.47%), Computer programmer (7.47%) and Computer engineer (4.60%).

Moreover, the EPyCE Report 2019 reveals that the hardest positions to cover in the future are technological nature, especially in the field of Data. In addition, the least difficult positions to cover will be those related to Administration and Finance (4.27%), Logistics (1.22%) and Consultancy (0.61%).

As we can see, the categories of Engineering, Technology, Marketing and Administration represent the professional sectors in the highest demand and also the hardest to cover both now and in the future in Spanish labour market. Without a doubt, the positions of Big Data, Data Scientist, Computer Engineer and Computer Programmer will remain the key players in the Spanish professional for many years to come.

As the report shows, the labour market is a complex reality comprised of multiple agents, each with their own perspective. Reports such as EPyCE 2019 help us identify the most important dimensions of this market, as well as the key competences and positions. Moreover, they also help to analyse Human Resource Directors’ perception of the Spanish labour market and to streamline decision-making.

Do you know all the benefits that EAE Alumni can offer you?

Danella Porras from Telefónica: “To be able to implement home working, companies have to establish a Digital Leadership strategy”