AI: The technology that perceives changes, evaluates, reasons, learns and remembers for us

Whether we acknowledge it or not, Artificial Intelligence is now a reality that determines both our social lives and our economy. By gathering and analysing data, this technology not only tells us which film to watch on Netflix, but also what to buy on Amazon, what to order on Glovo and what to listen to on Spotify. In one way or another, our tastes, desires and consumption habits are all being shaped by this smart avalanche of information that, although we cannot see it, is increasingly present in more and more aspects of our lives.

So, what is Artificial Intelligence (AI) and where does it come from? How has it evolved and what impact has it had on the world of business? Recently, the lecturer and Director of EAE’s Master in International Business,, Marc Sansó, discussed this topic in an online conference entitled “Analysing AI and its impact on business”.

Would you like to know what he said? Let’s find out.

Parameters that determine the evolution of every technology

The lecturer explained that “just like any technology, the development of AI is not linear. Its evolution depends on the following three parameters that affect its development or regression”:

1 - Investment: the most important and decisive factor when accelerating a technology.

2Type of agent investing in the technology: investment from Google or IBM is not the same as investment from an institute or academic institution. Cutting-edge companies have the power to create ecosystems that pull and stimulate the acceleration of technologies.

3 - Understanding which factors determine the evolution of a technology: AI has undergone an incredible surge in recent years thanks to the ability to access AI microchips, Moreover, from the 1990s onwards, the Internet helped with data and other elements. The emergence and integration of these factors has been decisive.

The role of AI has to be understood within its context and to appreciate its context, we have to have a clear understanding of the roadmap of digital businesses from the analogue age right up to the rise of robotics. 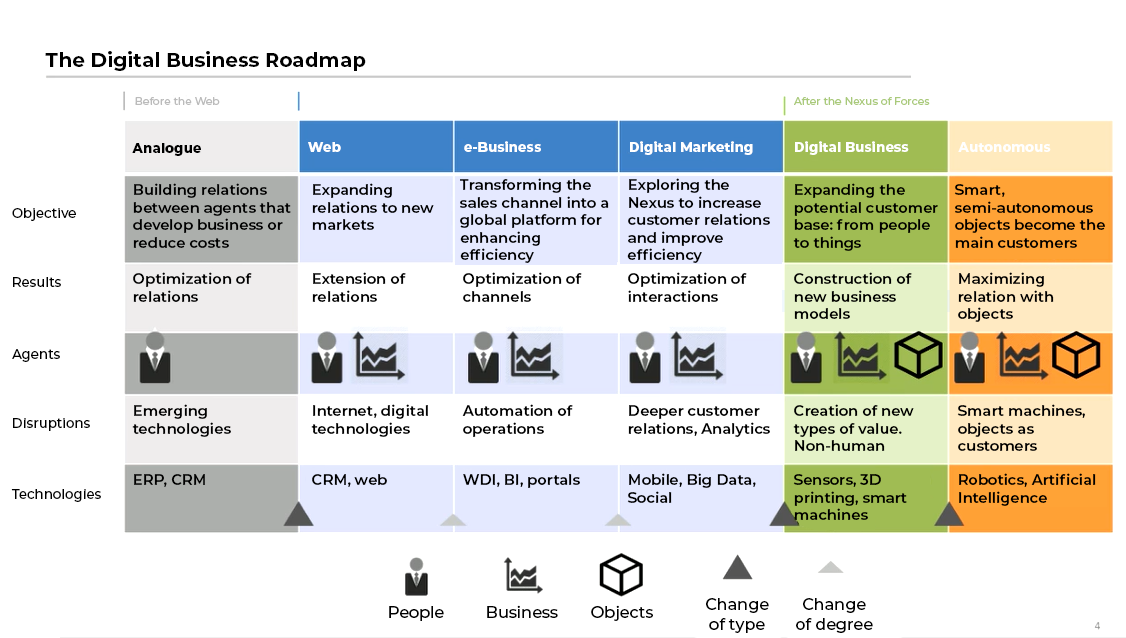 “In the analogue age, the aim was to bring together agents to optimize business”, explained Sansó. “This would not be achieved until the development of digitization, which began in the 1990s, expanded the capacity to do business with multiple agents and other countries”.

After the rise of the web, e-business began to develop and a new business paradigm emerged, which not only strived to expand to new markets, but also to optimize its channels by collaborating both in terms of producing and selling products.

Then came the arrival of digital marketing, social media and mobiles. These technologies played a decisive role in a phase characterized by the optimization of customer interactions, Segmentation was a key factor in this stage.

Last but not least, autonomous businesses will appear in which AI, together with robotics, will mark the beginning of the final stage of digitization.

What is Artificial Intelligence? 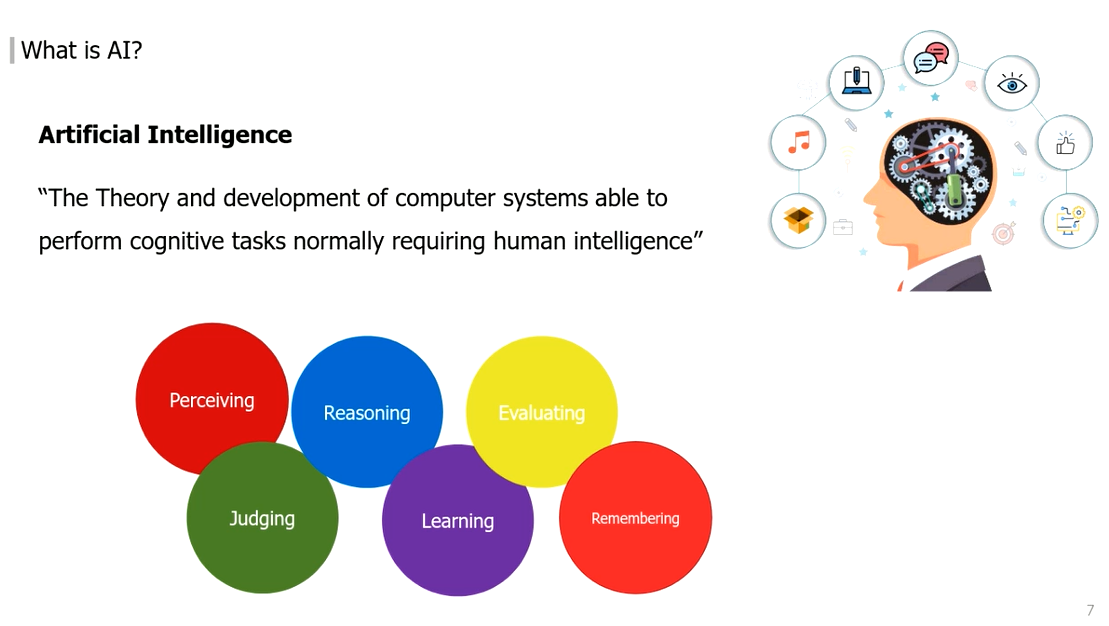 Artificial Intelligence has been a reality since 1954, explained Sansó, when the term was coined to refer to the capacity of computational de systems to carry out cognitive tasks that were normally performed by human minds.

It is a very broad concept, but the important feature of such machines is that they can perceive changes in their environment, evaluate, reason, learn and remember.

AI encompasses certain elements that we have to be familiar with in order to understand how it works:

- Hardware: processers, microchips, etc. These are AI’s muscles.
- Algorithm: AI’s brain, which is why it generates so much energy.
- Problem conceptualization: Approach and function given to the technology.

To finish off, Sansó presented the 4 waves of Artificial Intelligence that distinguish the stages of greatest evolution of the phenomenon. 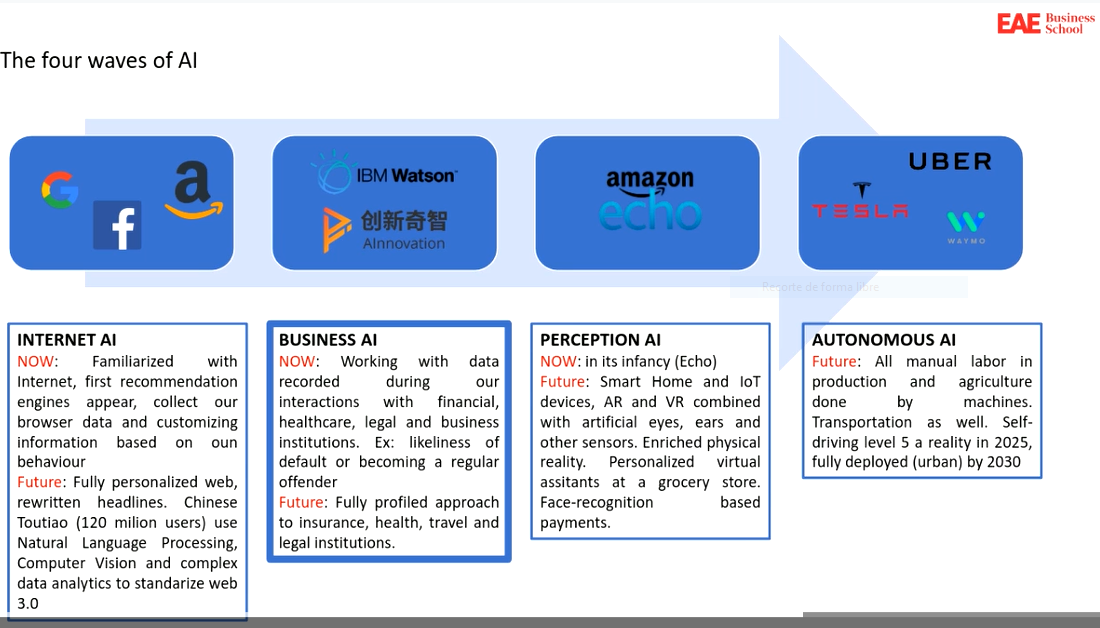 Internet AI: Direct application with the Internet, with completely personalized browsing. We read news headlines and highlights aligned with our own beliefs.

Business AI: We work with processes that are automated with AI to a greater or lesser extent. 100% automated profiles appear in relation to insurance, healthcare, etc.

Perception AI: Still in its infancy, this includes Amazon Echo, for instance. It enhances human capacities.

Autonomous AI: In this wave, Artificial Intelligence is fully autonomous and can carry out agricultural and production jobs. In addition, transport will be run by machines to a large extent.

Rather than a Terminator-style robot, Artificial Intelligence is taking over the world and the economy through the apps and different products that we use every day. As we saw in this conference, there is still a long road ahead, as its evolution is still under way. However, Artificial Intelligence is here to stay, with the power to continue transforming our day-to-day lives.

Andrés Plazas, the winner of the KPMG Hackathon 2020: “Events like this awaken our curiosity and encourage us to grow”