Inside the Mind of Ricardo Cavolo

“I always say that, from where I’m standing, I can see what the trees look like, but I have no idea what the forest is like or how it grows.”

Our brain’s right hemisphere deals with creativity — in there, we develop spatial abilities, facial recognition and music processing, among others. Today we wanted to have an expert in working with this side of the brain in order to get him to tell us how his right side works and maybe get to take notes on some of his tricks. 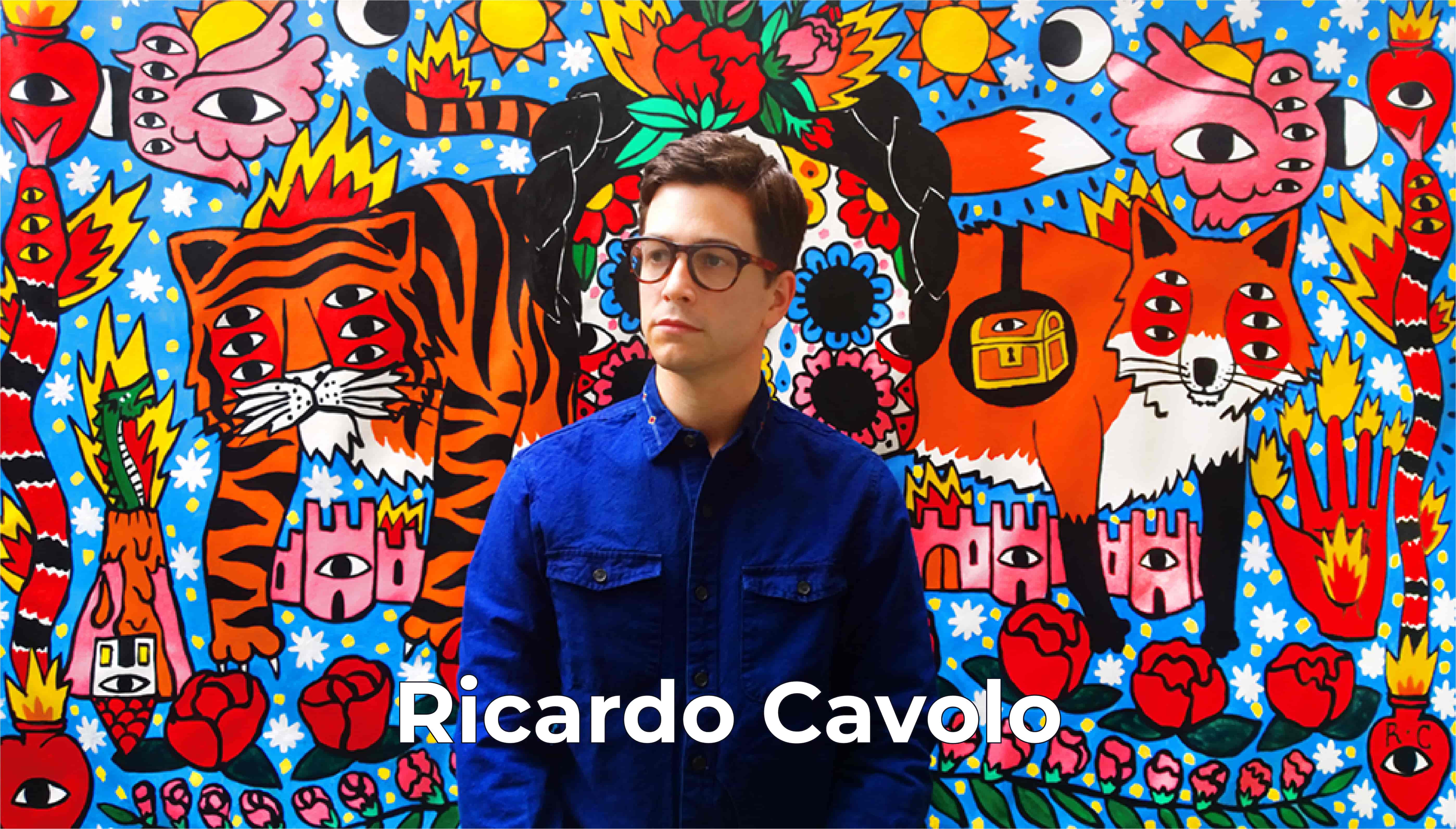 Ricardo Cavolo was born in Salamanca in 1982 and, from that very moment onwards, he’s been living among paint brushes and colours. Having a painter father and growing up with his teachings could have been one of the greatest influences on him and one of the main reasons why today we’re talking about a leading illustration artist around the world. 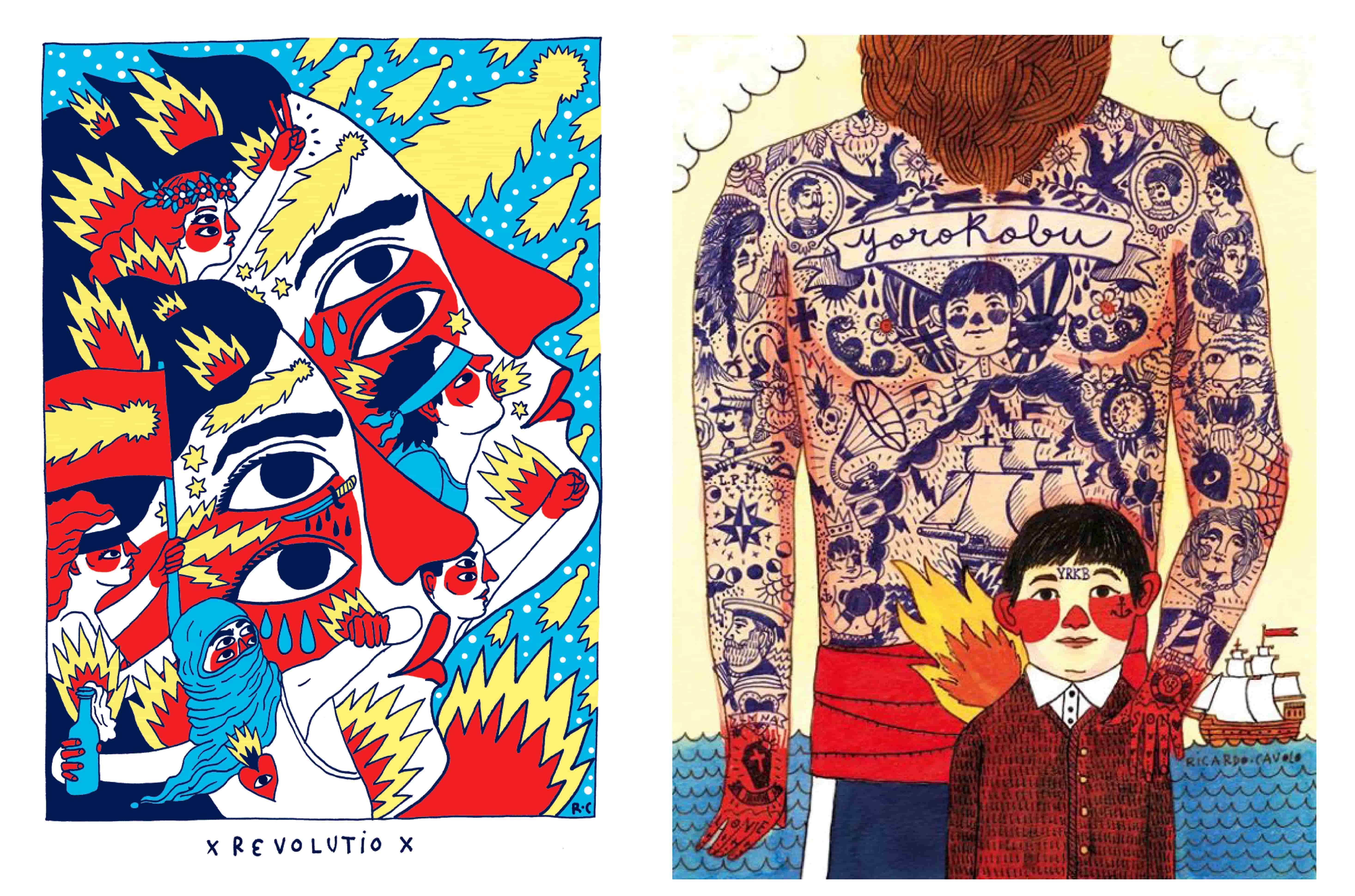 His creations are unmistakable. A burst of primary colours as the main protagonist in all of them. His most characteristic marks are the eyes and the fire, alongside with the tattoos —that tell the stories of the characters—, the noses and the blushed cheeks. The work of Ricardo Cavolo draws inspiration from daily life. A clear example of this is that we can find characters and heroes from our childhood having to deal with the ordinary things of our day to day. 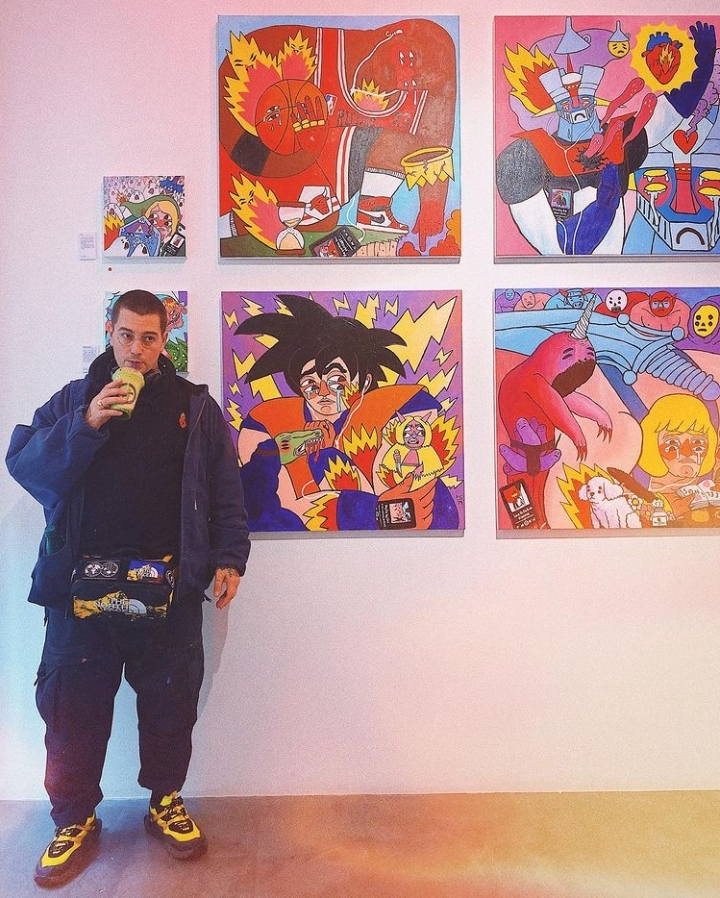 Calligraphy inks, his ability with the brush and the pen and his creativity have helped him become an artist with a unique world of his own and a role model worldwide. The work of Ricardo Cavolo moves through different settings and countries. He has designed the illustrations for books such as Romancero Gitano, written others like Jamfry, designed the cover of albums, painted murals across the world (Montreal, Hong Kong, London, Mexico…), collaborated with major brands like Nike, Apple, Cirque du Soleil, FC Barcelona and many more, and his creations are exhibited in top galleries around the world.

Murals by Ricardo Cavolo in Montreal.

But, what sets him apart from us? Where do his ideas come from? I’m sure, at some point in your life, you must have stared at a painting and gotten lost in the uncertainty of trying to understand what was going through the artist's head when that work of art was created. Today will be the first day in which all those doubts won’t go unanswered. Ricardo will open the door to his creative process in this interview. 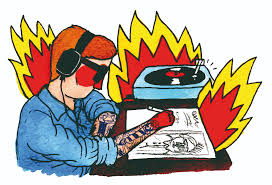 1. What is creativity for you? When can we say that a person is creative?

I was never quite sure how to answer these questions. I always say that, from where I’m standing, I can see what the trees look like, but I have no idea what the forest is like or how it grows. Haha! I understand someone to be creative when that person is able to translate ideas in a very concrete way — be it through a painting, a photograph, music or even with a ball. And it doesn't have to be a new idea or concept; what changes is the way you show it to the rest.

It’s not an expert's opinion but I think we’re all born with creativity. Then, two situations must take place: that you train it and that you find a way of channeling it. As I was saying before, creativity can exist in numerous ways; it can be there when you find a mathematical equation that explains black holes, when you make art, when you cook, when you dress… That’s why all of us have different ways and processes through which we train creativity. As for me, I find that audiovisual material and music help a lot. Music videos and cartoons get to me in a certain way that gets me going.

3. Could you sum up a day in your studio? What's your work routine like?

I’m very methodical in the sense that there aren’t many big changes from one day to the next — except when I’m travelling making murals. Since I became a father, my working time has been reduced to less than a half, so I have to be very focused during those hours. And that’s it. I attend to my work, be it my next book, illustrations for advertisements or whatever is up that particular week.

4. What’s your creative process like? How are your ideas born?

I never put much time into coming up with ideas — at least I don’t sit in front of an empty canvas until I think of something. I forbid myself. It has never worked for me. What I do is I keep my head on the task at hand and, in the moment I least expect it, the solution comes to mind.

5. Creative frustration: when you pursue an idea and it never seems to come out as you want it. How do you deal with this?

Truth is… it’s rare that an idea that comes up for any given project disappoints me at the time. I trust my guts a lot and I follow them all the way through. I think that during the creative process there are two ways to go on about it: re-thinking, working over and over until you are satisfied; or going with the first thing that comes to mind and following that without giving it much thought. The latter is the way I do it. It’s a bit like doing it blindly, in a rush and not thinking much. I do it like this because I get bored if I try the other way! Haha!

6. Any advice on creativity that could help us?

I always thought that the right way to work was rethinking over and over a million times and going back every time to work on it. But I have learned to trust my instincts and let them carry me almost blindly. 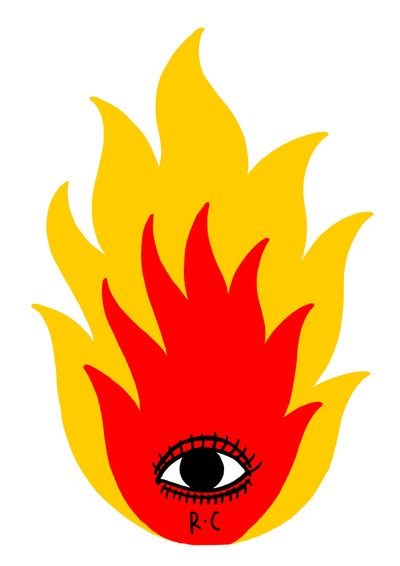 Training creativity or finding a way of channeling it. Having the problem in mind in order to find a solution instead of facing the empty canvas until a solution comes up. Trusting our instincts and letting them guide us. These are some of the tips that Ricardo Cavolo gave us in order to improve our creative process and find that creative fire that lies inside all of us.